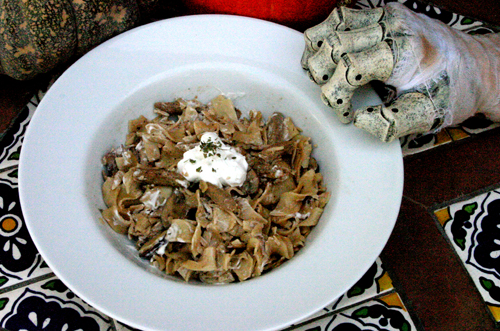 I used to work for an outdoor science school in the San Bernardino National Forest. I haven’t been back up there since I moved into the “real” world last year, but have kept in touch with a few friends that still work there. When we decided to sell granola on a larger scale, our biggest hangup was finding an industrial kitchen to use. Finally, a few weeks ago, we realized that we might be able to get access to the camp kitchen I used to work in. After a bit of schmoozing, we were invited up there this weekend to cook. We are SO thankful for that opportunity given to us, and even more thankful to my friend Amy, the site director at the camp, for helping us so much with the process! 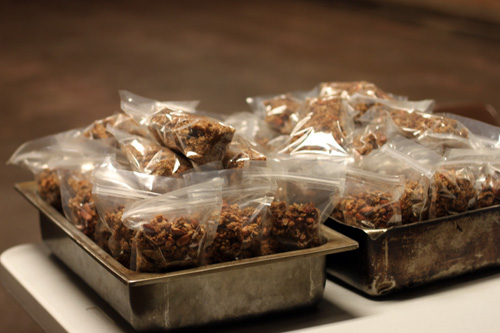 We drove up to the mountains on Saturday morning, and acted as if it were a long multi-hour road trip. We couldn’t get out of town without first going to find the very rare but most important road trip food, Andy Capp’s Hot Fries. This is a food I have loved since I was a little kid at the snack bar of elementary school, but it was new to Aimee and Mai-yan. Aimee got a chance to eat hot fries on our Pacific Coast road trip a few months ago, and has been truly addicted since then. We went to the gas station near my house where Wes found the hot fries before, after begging him for the location (it was hard to convince him to divulge the location for fear that I would start going there every day). Our mouths watered as we got nearer. We rushed inside, looked around frantically, and more frantically, and after searching the store with three pairs of eyes for about 10 minutes, realized they weren’t there! It was horrible. 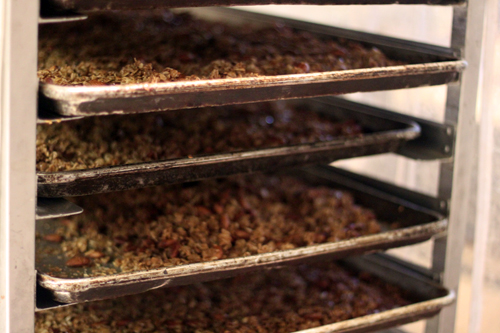 We then went across the street, hoping we’d just gotten the wrong gas station. Not there either. So, sadly, we got back in the car, drove a little ways, and ended up stopping at four more gas stations looking for them, with no luck. At the last station before the mountains, we gave up and bought Chester’s Hot Fries (two big bags), which are an acceptable stand-in, though not perfect, and ate one whole bag in the next half hour (which was the last half hour of the 1.5 hour drive). 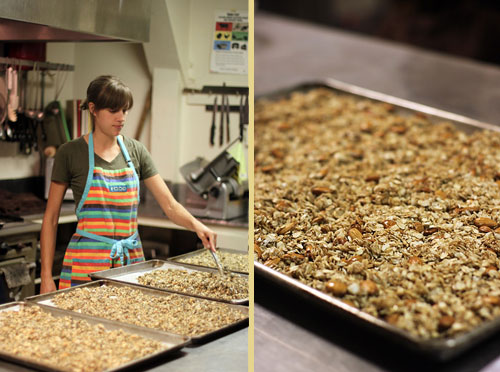 The weekend was a success, and we were impressed with how little time it takes to bake 120 bags of granola in an industrial convection oven with 10 full-sized racks. Aimee is now on a mission to get an industrial kitchen in her own home stat. We were also lucky that our bake-a-thon happened in a camping setting, because we were met by Aimee’s parents and two friends who hiked San Gorgonio Mountain while we cooked. This also gave us an extra few hands for cleaning, labeling, and packaging, and made it a party weekend. It felt very appropriate to be cooking our Dirty Gourmet granola in the woods. It’s beautiful up there right now- the leaves of the black oaks are just starting to turn bright yellow. Don’t miss out on this fleeting season! 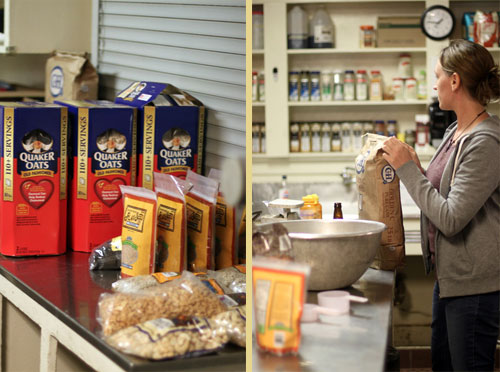 This beef stroganoff has been made for several trips already. We made the vegan version for all our meat eaters, and even the very most weirded-out-by-fake-meat person demolished their bowl. Fake sour cream really is quite good, and we used Smart Strips beef strips, which are our favorite fake steak substitute. If you don’t care about making this vegan, feel free to substitute the fake stuff with the real ingredients to make this Beef Stroganoff as dairy and/or meat filled as you’d like.