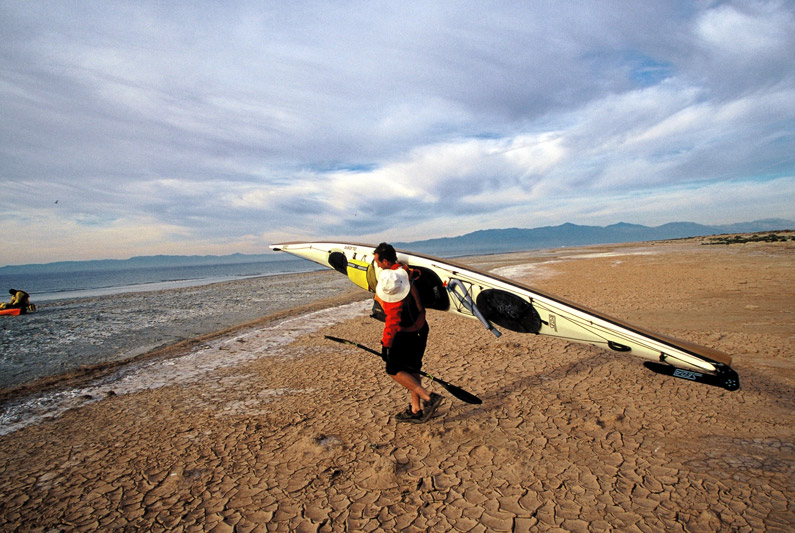 We are so excited to share this guest post from Chuck Graham, a friend of Aimee’s father who also happens to be an incredible professional adventure photographer. Here is his story about a bird watching kayak trip to the Salton Sea.Thank you so much Chuck!

It felt like kayaking in a land that time forgot. Paddling across the Salton Sea, there wasn’t a drop of water out of place, glassy conditions prevailing during our kayaking and bird watching excursion. The only distinct sounds on the water were thousands of American White Pelicans. Feeding, frolicking and preening in the shallows, they were enjoying their winter stopover in this accidental manmade habitat as pink and orange hues swept across the Santa Rosa Mountains to the west.

Depending on your point of view, the Salton Sea can appear like a dismal, lifeless wasteland or a vibrant desert oasis for 400 bird species seeking refuge here each winter. California’s largest lake was created in 1905, when the Colorado River swelled and breached levees and dikes on its way to becoming the Salton Sea. We were paddling 228 feet below sea level in what was once known as the Salton Sink directly above the San Andreas Fault.

Once deemed the next Las Vegas in the 1940s and 50s, the Salton Sea held a resort-like atmosphere. Waterskiing, fishing and boating were favorite pastimes. There was a time when 400,000 boats used the sea each year when more people visited the Salton Sea than Yosemite National Park. But over the decades the Salton Sea has endured more flooding, which thwarted further development. Because there are no outlets for flood waters and the Salton Sea is 25 percent saltier than the Pacific Ocean, over time high salinity levels have induced mass die-offs of fish and birds. There used to be several species of fish living in the sea, but tilapia has proven to be the only fish able to tolerate such high salinity levels. Eventually the 110-mile shoreline lost its luster.

However, the Salton Sea still holds a certain allure, and it remains one of the best birding locales in North America. We paddled and explored its mud-cracked shorelines littered with dead fish, while scattered flocks of Western Sandpipers and Black-necked Stilts foraged in the crunchy brine. Eighty to 90 percent of the entire American White Pelican population winters on the Salton Sea. Statuesque Great Blue Herons and Great Egrets stood motionless in the shallows waiting patiently to skewer a tilapia swimming beneath them.

Soaking in the Salton Sea

Diversity of birdlife is what makes the Salton Sea so attractive to birdwatchers. Kayaking around the entire lake exposed us to throngs of American Wigeon, and Northern Pintail, Long-billed Dowitcher and Least Sandpiper, Herring and Ring-billed Gull. When we camped along its shores we saw Ferruginous Hawk, White-tailed Kite and Red-shouldered Hawk. Burrowing Owls were spotted several times close to our camps. 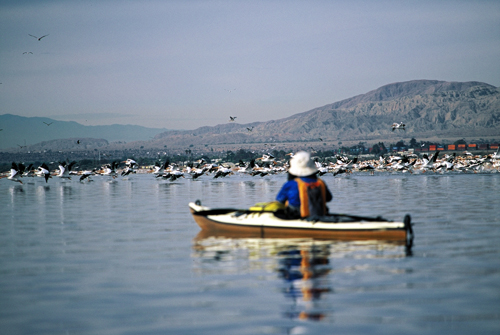 Continuing southward, we pushed our kayaks into the silky smooth water just east of the sand dunes between a covey of Long-billed Curlews and American Avocets feeding in the brine-covered rocks. Nearby was an abandoned military test site. It appeared like something out of the apocalypse. A long black point extended far off the site and out to sea. At least a mile offshore it slowly began to move, almost rolling, as the desert played tricks on squinting eyes. Then in a massive flurry of black, thousands of Double-crested Cormorants took flight, running on water, flapping furiously for liftoff all in one direction. We soon discovered that the cormorants were the current keepers of the abandoned navy site.

Established in the 1940s, the test base was involved with the Manhattan Project and for atomic testing. Today it looks like it didn’t survive a nuclear blast, although there are reports of maneuvers in 1991 during the first Gulf War. Guano-covered pilings still stand, now prime nesting and roosting habitat for hordes of cormorants. 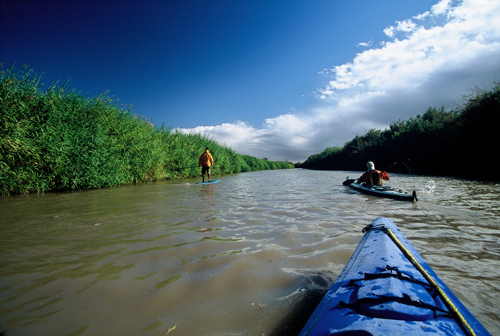 Paddling nine miles east, we skirted around Mullet Island, an extinct volcano and the edge of the Sonny Bono Salton Sea National Wildlife Refuge. The refuge winters up to 30,000 Snow, Ross’s, and Canada Geese, and 60,000 ducks from November through February. Endangered species we observed on the refuge included the Southern Bald Eagle, Peregrine Falcon, California Brown Pelican, Yuma Clapper Rail, and Desert Pupfish.

Sonny Bono Salton Sea Refuge was designed to reduce waterfowl depredation to adjacent croplands. Management practices benefit the high concentration of waterfowl and shorebird species that flock each winter to the refuge. They include an intensive farming program that involves cooperative farmers growing crops for waterfowl consumption during the winter. The refuge also manipulates water levels in ponds to provide ideal habitat for shorebirds and waterfowl. The refuge extends a couple of miles out to sea, and small aircraft is required to stay clear of the multitude of avian species that hone in on California’s southeastern corner. 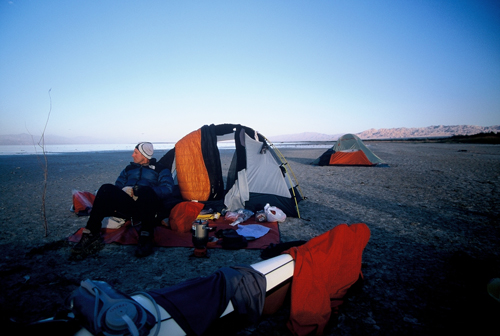 Our last night on the Salton Sea, we camped on a sandy finger where the Alamo River and the Salton Sea converged. We barely had to leave our tents to absorb all the birdlife surrounding us. Flocks of American Avocet and Western Sandpiper tiptoed in front of us. A platoon of American White Pelican flapped their creamy white wings bathing in a fading sunset. Bird activity lasted well into the night, lulling us to sleep during a cool, crisp night on the Colorado Desert.

The best time to visit the Salton Sea is in the winter when day time temperatures are mild to warm. Evenings can reach freezing temps. Fall through spring is also the best time for bird watching. The Salton Sea is on the Pacific Flyway, and is one of the most important winter stopovers for migratory birds.

The Salton Sea State Recreation Area is located on the northeast shore. This is currently the best, most convenient place to leave your vehicle and begin your paddling trip. Call the park office at (760) 393-3052,www.parks.ca.gov.