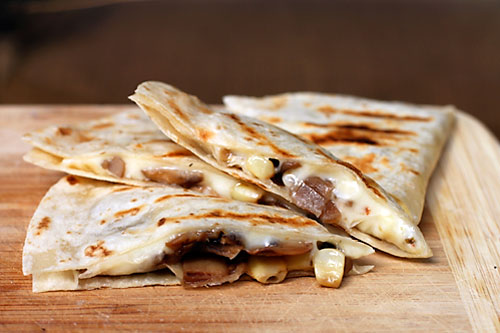 Quesadillas are a staple at my house. We always have tortillas and cheese, so when we’re lazy and don’t feel like cooking, that’s usually the first thing we reach for. Sometimes we’ll fancy them up by adding some beans, grilled or sauteed veggies, or even sliced fresh tomatoes. Other times, it’s just straight cheese. It just depends on what we have and our laziness level.

You can just as easily make fantastic quesadillas on a grill or campfire if you don’t want to use your stove. All you need is some foil and if you’re using a campfire, a grate. The trick is to use one tortilla, pile on your ingredients, fold it almost like a burrito, and wrap it in foil. Then stick the foil packet on the grate, and let the it cook until the cheese is melty and the tortilla slightly crisp. My favorite part is that you get beautiful grill marks through the foil—you won’t get that in a skillet at home!

You don’t even need a plate to eat a campfire quesadilla. Just let it cool off a little bit, and then eat it straight out of the foil packet, like a burrito. If you make a few extra, they make a perfect lunch for the next day. No need to heat them up—they’re good cold too.

The recipe below is for Mushroom and Corn Quesadillas, but do experiment with other ingredients. I like to use veggies like bell peppers, onions, zucchini and tomatoes. You really don’t even have to cook them first—just throw them in raw and the quesadillas will still be great, they just won’t have that same caramelized and smoky flavor you get if you cook the veggies first. Black or pinto beans (whole or refried) are also delicious. And you can’t go wrong with plain cheese. 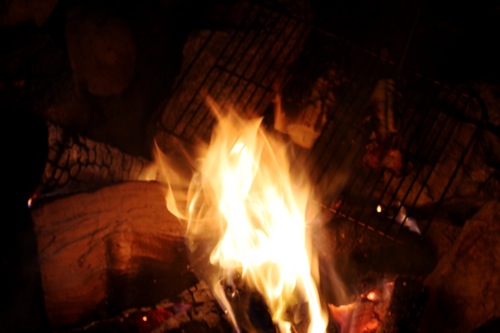 5-30 minutes, depending on your ingredients / about 5 minutes