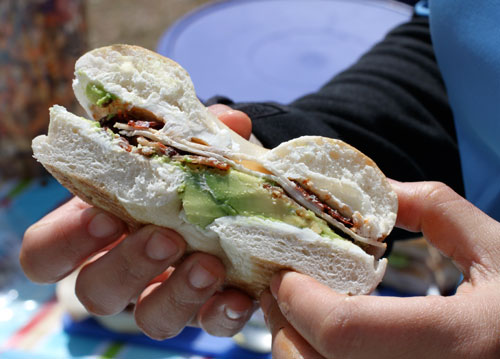 Whenever I go on camping trips without the Dirty Girls, my fiancé (Nick) plans breakfast and I plan dinner. Unfortunately, lunch usually never quite makes it on our radar and ends up being a neglected meal. I have been guilty of some pretty boring lunches, more often than not, consisting of uninspired sandwiches. The main issue with making sandwiches while camping is that I always forget about the fixin’s (condiments, cheese, lettuce etc..). This Chipotle Turkey Bacon Sandwich is an attempt to redeem my wicked old ways.

The first time I made this Chipotle Turkey Bacon Sandwich was back in January on a trip to the Anza-Borrego desert for Nick’s birthday. We were heading out on a bike ride to explore the local sights and once again I was packing up lunch as an afterthought. I quickly made turkey sandwiches and tried to fancy it up with chipotle peppers in adobo sauce and the pre-cooked bacon I had on hand (leftovers from testing the chipotle black bean soup recipe). We visited the actual “Palm Spring” – what used to be a stage coach stop along the Great Southern Overland Stage Route of 1849. Apparently, it was a hip and happening place back in the day. Now, it’s just a plaque designating a historical landmark and a little cesspool reminiscent of a spring. After more wiping out than actual riding on the sandy trail, we made it to the Hollywood & Vine intersection. Oddly enough, in the middle of nowhere, on top of a dirt hill in Anza-Borrego, there is such a street sign. If you ever happen to be in the area, it’s worth a gander.

We called it quits at that point and had our lunch under one of the few pinon pines tall enough to offer some shade. We were all dusty from the trails, and all around us was nothing but more dirt and sand. All I wanted was a cold refreshing beverage and something savory. We dug into the sandwiches and to my surprise they were good! The bagels were moist and the bacon was crispy and the chipotle peppers added nice flavor and kick to the whole thing. I had a feeling I was on to something.

The recipe has been refined since, and what you’re getting here is the final ultra-gourmet version with cream cheese and avocado. I recommend making the bacon ahead of time or buying pre-cooked bacon. I cooked extra bacon while making breakfast and hid it until it was lunch time. The nice thing about this Chipotle Turkey Bacon Sandwich is that you can make it ahead of time. It will survive being in your backpack until you find the perfect lunch spot (just don’t leave in there for too long – use your common sense when it comes to general food safety). This recipe isn’t going to get a health award but I promise you, it will make you happy. 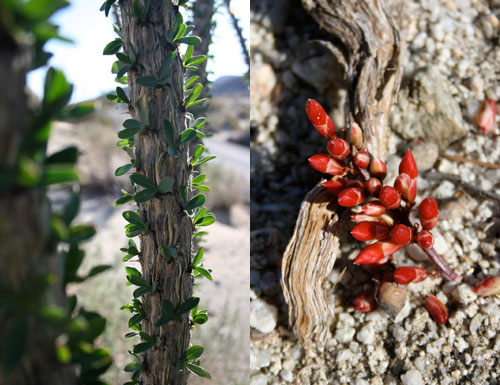