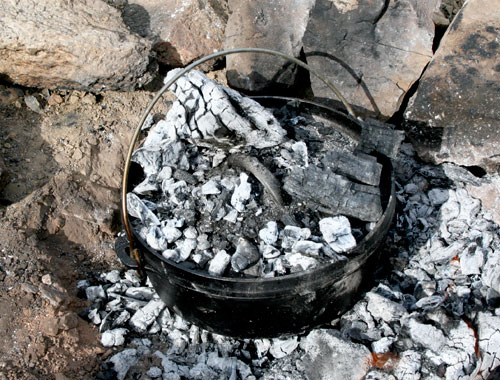 A dutch oven is a heavy, high-sided pot, usually made of cast metal, and often made for use over a fire. Dutch ovens have been used to cook for centuries, and are still popular today because of the high-quality and long lasting design. They are especially popular in cooking over campfires, giving anyone the ability to “bake” without a traditional oven available.

The material that a dutch oven is made of is an important part of what makes a dutch oven unique and useful. Though the term ‘dutch oven’ is used to describe several different types of cookware, the type most commonly used for camping is made of cast-iron. This type of metal lasts indefinitely, and creates even heating throughout the pot, much like a traditional oven. Camping dutch ovens usually have three legs that raise the pot above the coals or fire. It will also usually have a tight-fitting lid with raised edges so that coals may be put on top.

Cast iron comes with a lot of benefits. It is extremely long lasting. Even if you find an old cast-iron pot that looks worthless, you can season it and make it as good as new. This is a non-toxic kind of metal that, if well seasoned, ends up being non-stick as well. Meals cooked in a cast-iron skillet also provide a a good supplemental source of iron as some of the iron from a cast-iron skillet transfers to your food. This type of cookware is usually inexpensive, and can be even more so if you look at flea markets and swap meets for used items.

Dutch ovens are most often used to make breads, cobblers, and soups or stews. These are all recipes that require even, slow cooking, which is what a dutch oven excels at. Anything that can be cooked in an oven can also theoretically be cooked in a dutch oven. There are a number of groups that challenge themselves to be creative with the uses of the dutch oven, creating beautiful slow roasted meats or moist cakes. This Dutch Oven Strawberry Rhubarb Cobbler is a great place to start for an easy and forgiving cobbler recipe.

How To Use On A Campfire

To use a dutch oven in a camp setting, you should start by making a good cooking fire. This means being patient and waiting for a good bed of coals to build up. You will be able to cook more evenly if you can get the heat from coals rather than dancing flames. It is best to prepare the food you’ll be cooking away from the fire, and set it aside until you are ready to cook, just as you would at home. Once the coal bed and food are prepared, place the dutch oven on top of the coals, and put the lid on, making sure it fits tightly so that no coals get into your food. Shovel some coals on top of the lid to evenly cover the pot. If possible, use a few larger pieces rather than a lot of ash. This will help ensure that no ash falls into the food when you check on it during the cooking process. 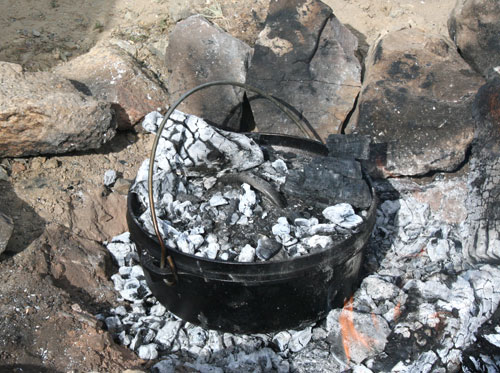 Since dutch ovens are usually made from cast-iron, they require a special type of care. If you buy a cast-iron pot new, it will usually come pre-seasoned. Seasoning is a process that helps keep your pot from rusting and in good condition. You should not use soap on dutch ovens, because it will break down the seasoning and cause it to rust. To care for your dutch oven, remove all food by heating some water in the pot and scraping the food bits off. After this, add some course salt to the pot and use a lemon half to rub the salt around. This will help absorb any leftover residue from the food. Finish cleaning with hot water and dry immediately. Store the pot without the lid to avoid humidity build-up inside.

Seasoning allows oil to fill tiny pores in the metal, creating a non-stick surface and keeping water away from the metal that would cause rust. Each time you cook something high in fat in your dutch oven, it will add to that oil layer and keep the pot seasoned. Humid environments or improper cleaning can create a need to re-season your cast-iron, which can be done at home.