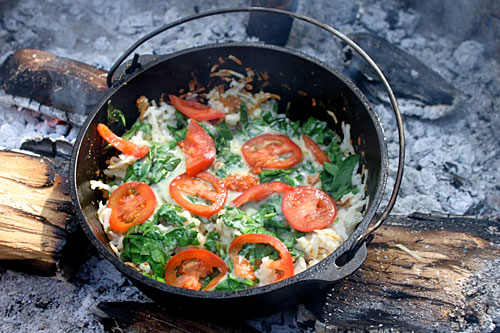 My camping trip two weekends ago to the mountains north of Santa Barbara was fantastic. It was just what I needed to get out of my little funk. We got there early Saturday afternoon, set up camp, and then took a long sunset walk. We chatted by our toasty campfire and ate tortilla soup, followed by chocolate and toffee cookies that Ro and Katie made for dessert. Sunday morning we slept in and made a lazy breakfast of hash browns on the campfire, with sharp cheddar cheese, spinach, and tomatoes on top.

Even the drive home was great. We stopped in Ventura at an olive oil shop called We Olive. I met a man from Paso Robles who grew and pressed the most delicious olive oil I’ve ever tasted. After olive oil tasting, we decided to skip lunch and just eat dessert—we sat on the tailgate of our truck and ate giant scoops of ice cream from McConnells.

It was a short trip, but it was so worth the effort. Lots of times I come home from weekend trips feeling exhausted and wishing for an extra day. This trip was different—I think because it was so impromptu. There was no campsite to reserve weeks in advance, we didn’t spend a whole day packing, and we just enjoyed the overall process. I came home refreshed, energized and ready for the week.

I got my dutch oven a year ago for Christmas and it’s been with me on every car camping trip since. I’ve made lots of soups and stews in it, but until the last few times I’ve used it, I’ve been a little scared to make things that are more likely to burn. It’s improving with age, though, as I knew it would. Cast iron products always do. Now it’s almost like a nonstick pan, and my fear of burning things in it is just about gone. The hash browns I made turned out perfect. Topping them off with some cheese and veggies made it a complete meal.