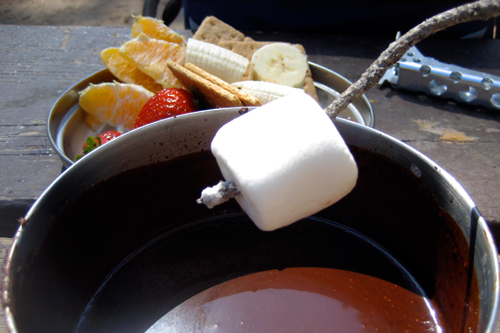 Camping and romance may seem an unlikely pair, but to me, they go together perfectly. In fact, the two most romantic days of my life have involved camping.

We had spent the weekend in the Sierras camping while my parents and our friend Kim ran a 50K race. On our way home, my then-boyfriend, Kismat, insisted we drive home through the park because Kim had never been to Yosemite. It was a Sunday afternoon in June, so we knew it would be crowded, and we were tired and dirty after roughing it for a few days. We just wanted to go home. Driving through Yosemite was not on the way, but reluctantly, we agreed to go. Kim deserved it after such a tough race, especially after famously stating “my heart hurts” by the end (which he will never live down). We tried to appease him by stopping a few times to take some pictures, but he really wanted to take a walk as well. Finally, we pulled the car over and walked out into a beautiful, but mosquito-infested meadow. All of a sudden, Kismat dropped down on one knee, gave an incredibly long (and sweet) speech, and proposed. Of course, Kim was in on it, and of course, I said yes.

A few months later, we had the crazy idea to get married in a campground. We invited our friends and family to celebrate our wedding in the courtyard at San Clemente State Beach, and camp out with us for the weekend. Weather threatened our fully outdoor party all day, but surprised us by parting the clouds and offering a perfect sunset over the ocean just as we said “I do.” The night remained dry, and it turned out to be a huge success. There’s nothing better than a night of dancing, micro-brewed beer, and Indian food, with all the people you love. Oh, except finishing it off sitting around the fire, telling stories, and listening to friends play guitar. That was our wedding night.

In case I haven’t convinced you yet that camping can be romantic, below is a recipe for camping-friendly easy chocolate fondue. I can’t think of a food more romantic than chocolate. Melted chocolate is even better. How about dipping strawberries or marshmallows and graham crackers in melted chocolate while sitting under the stars? Now that is what I would want for Valentine’s Day. 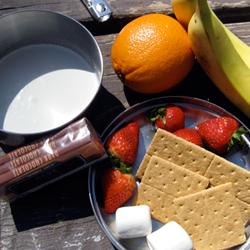 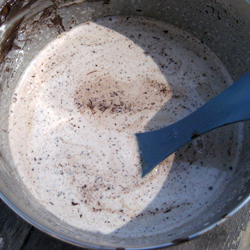 This recipe is as simple as it gets. Just heat up some cream, add some chocolate and stir. At first it will look like a mess (like the picture on the right, above), but just keep stirring and it’ll come together into a beautiful, silky pool. Then start dipping. My favorite things to dip are pear slices, bananas, and pretzels, but it’s hot, melted chocolate—you can dip just about anything and it’ll be good. Happy Valentine’s Day!