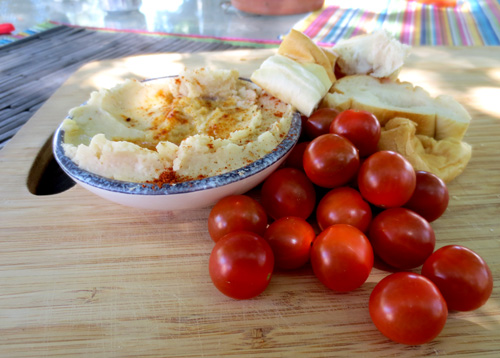 by the amazing guy Bryant Terry for his birthday. We got into a rut this summer due to a broken air conditioner and refused to cook anything but salad. The book was put away until recently, but is now getting the large amount of use that it deserves.

I’ve not had an easy time satisfying my need for good ol’ southern cookin out here in the west. You know my frustration with locating favorites like grits, and now that I have a vegan boyfriend, I gave up and thought it was just impossible. The Vegan Soul Kitchen cookbook has changed my attitude. The nicest thing about it is that it doesn’t rely on all the overprocessed fake foods. He uses things like coconut oil and homemade almond milk (which doesn’t sound that difficult to make).

Along with grits, I love lima beans. They were one of those things you were told to hate as a kid, so I avoided them for a while. When I found out what I was missing, I cooked them all the time, spreading their deliciousness throughout college. Lima beans aren’t any easier to find out here than grits. Not even frozen. I found some dried the other day, and asked Aimee to help me ready them for dinner. She lives in a household of about 15, so she soaked and cooked the entire package, and I was stuck with a pile that seemed to grow every time I ate some. I found this Garlicky Lima Bean Spread recipe in my new cookbook, and the rest of the lima beans disappeared into bellies instantly. 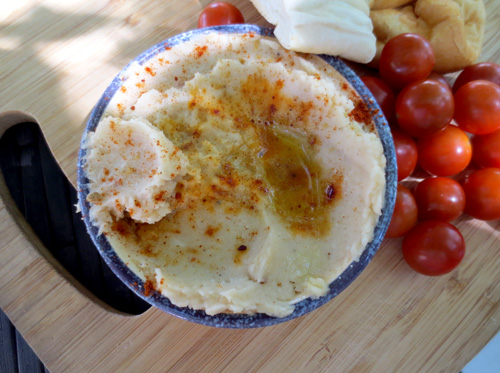 The spread is like a hummus, and very good on sandwiches or with crackers or hunks of bread. It calls for a lot of garlic, and didn’t taste like enough when the spread was still warm, so I added more. It got a lot garlickier after chilling, though, so go with the amount listed. This is a great make-at-home food to take on your next camping trip, or you could definitely try making the whole thing in a dutch oven over a fire if you’re out for a long trip with a lot of people.