Its picnic time. The weather is HOT and I have no air conditioning, which means I’ll have the best luck enduring the heat in the shade of a big tree. Its been birthday time the last few weeks as well for us Dirty Girls. My birthday present to Mai-Yan was this cocktail at her Birthday Barbecue Beach Bash. It was invented, however, for a picnic. And that is how it will be used for the rest of the summer- especially since I was given a beautiful picnic basket for my birthday last week. 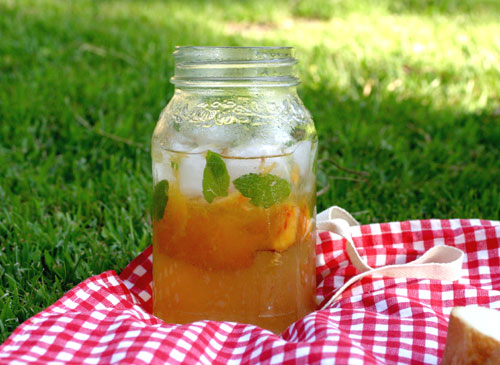 I had decided that I wanted to make a ginger peach cocktail for a 4th of July picnic. I didn’t know what kind of alcohol to use, but I suspected it would be something frou-frou like rum – the kind of alcohol you normally find in a girly spritzer. Instead, I found this recipe for Ginger Peach Juleps. It is a hilarious recipe requiring morning dew on the mint, and ice the size of “April corn snow in Northern Vermont.” Plus, I loved the idea of bourbon. It took some of the girliness out of the drink, and a lot of men ended up happily drinking the cocktail at the party (even demanding that I post the drink on my blog immediately!). I substituted ginger ale for ginger syrup, hoping its sparkling nature would be able to replace the “morning dew” on the mint for freshness. The mint in my yard won’t have much dew left on it past about 6 am, which is when I won’t be drinking this. I also think that ginger ale is easily carried separate to a picnic, making it easy to make a virgin version.

The recipe would be great camping too, of course. Whiskey is always a popular lightweight choice for an overnight, and it won’t be a problem if you bruise up the peaches in your backpack, since you have to do just that eventually anyway.

Luckily, it’s late afternoon by now. I have some leftover ratatouille that came from the tomatoes and squash in my garden, and I have the ingredients for this cocktail. I’m gonna head over to my big shady tree. 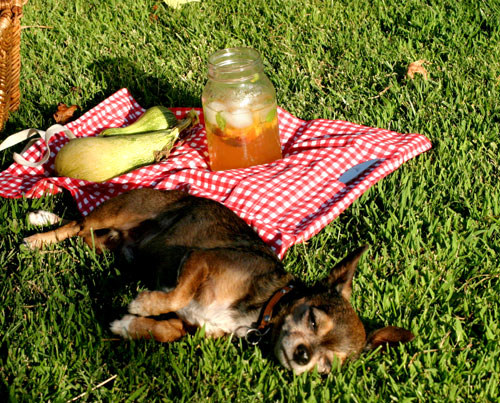