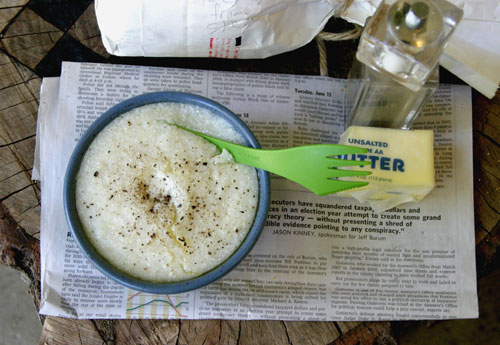 Hey ya’ll! Its the southern side of Dirty Gourmet again. I spent a good solid week in South and North Carolina recently, which was my first trip back in almost three years. That’s where my whole famn damily is from, and they sure embrace their southern roots. We eat a lot of grits, which is a ground hominy (corn) breakfast item traditional of the south. I learned from my mother and my Uncle Steve since birth about bein’ a grits connoisseur. It includes requiring them for breakfast from the porch of a mountain house on your birthday, and driving around to remote locations in the sticks, begging restaurant managers to sell you bags of their prized menu item- even if they aren’t for sale.

My mother has recently moved to Las Vegas, where they never heard of grits. She brought a few bags with her on her move out, and has gotten shipments from her mother and her best friend pretty regularly ever since. Last time I was in Vegas, I discovered eight bags of grits in her pantry, one of which said “To Emily, Love Uncle Steve” on it! “She’s become a hoarder,” I thought. But then I came home with my Uncle Steve grits to find that I already had 5 bags myself. 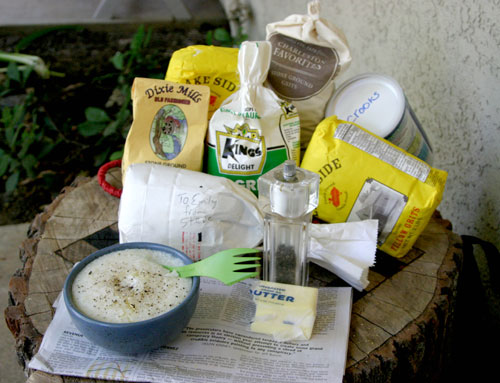 Anyway, I had a good time in the Carolinas. My boyfriend’s parents came down from Jersey, and got introduced to their first helpings of shrimp n’ grits in Charleston. Then in Raleigh, I picked me up a bag of $7 grits from the fancy Fresh Market, and that’s a lot of money to pay for such a thing. They were worth it. I don’t believe they can take the place of my still favorite grits from Kinston, NC at King’s BBQ, though. But you gotta be good to get ‘em.

We’ll do a basic grits recipe here first, because it matters. Especially if you’ve never had them, you definitely won’t learn to like them if they’re lumpy and gritty. You want ‘em creamy. And I like to attempt extreme creaminess without the use of actual cream. That way, they are still healthy and can be taken on any camping trip (although I can’t avoid a pat of butter on top no matter what). This process may seem easy, but it probably differs from the package or anyone else’s. The cold water start is important.