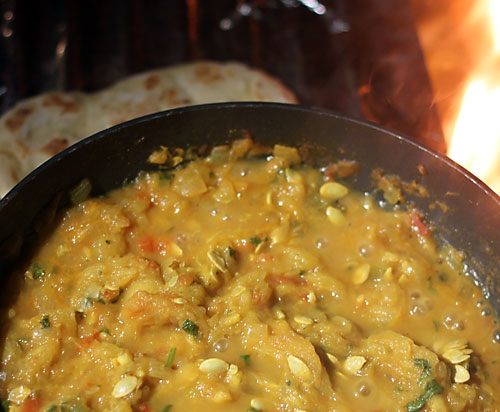 Sometimes it’s fun to plan a big, elaborate meal. One that seems unachievable because it’s too many dishes or too complex. It’s a challenge, and I love challenges in the kitchen. When I’m cooking outdoors though–while I might pick something gourmet to cook, I rarely go for elaborate. Especially without the help of Emily and Mai-yan.

So on our trip to San Simeon a few weekends ago, I hadn’t really planned an elaborate dinner on Sunday night, but that’s what it turned out to be. I had made mung dal at home and also some naan dough that I planned to cook in a cast iron skillet over the campfire. As I was leaving the house, I remembered some overgrown zucchini that a friend gave us and on a whim decided to grab those too. At camp we ended up putting together an amazing Indian spread that included dal, Indian Spiced Fire Roasted Zucchini, naan, and raita. To top it off, the all the food was hot at the same time, something I often can’t even achieve at home! 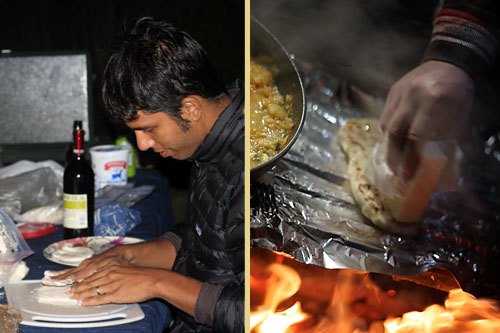 The amazing part about it was that it was completely doable. I gave each person a specific job, and everyone happily went along with it. Together we produced a meal that I’d have been happy to eat at a restaurant.

Here’s a recipe for the Indian Spiced Fire Roasted Zucchini. The recipe was made up on the spot, but it was a hit! 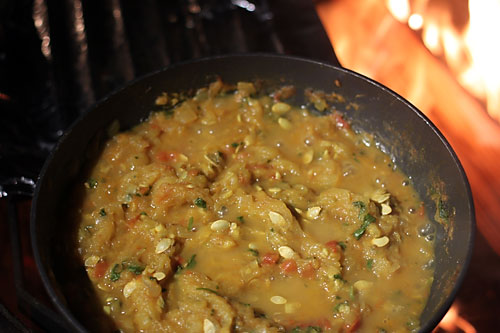