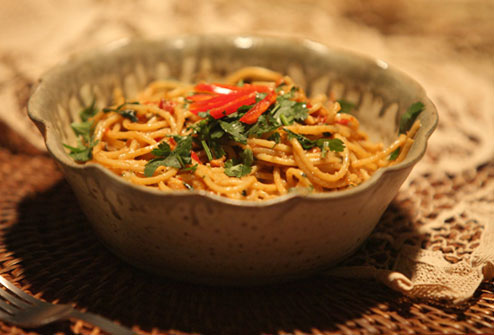 Last weekend, I was sucked in yet again to “snowstorm backpacking.” We planned another snowshoeing trip, but knew ahead of time that there was going to be a storm- again. I was really the only one against it this time. Everyone who had avoided the trip to Yosemite was now itching to get out, and used my success as an even bigger reason to go. I tried to get myself out of it, threatening to spend my weekend cuddled up with my chihuahua in my living room. But I couldn’t let the other Dirty Girls have fun without me, especially when I didn’t have any real excuse. I grumbled a good amount; all the way to Aimee’s house, and then all the way to Mt. Abel.

It ended up being a fabulous weekend. There were three people who had never used snowshoes before, and then me who had only done it once. Then there were the two “manly men”. They had the experience/age, whiskey, and the GPS. Aimee’s dad wins the prize for the manliest. He showed up with the hugest backpack I’ve ever seen! And after putting on his pack cover, I swear it looked like he was going to hang glide right off the side of the trail into the Carrizo Plain! I felt bad for him, but I was pretty happy about everything he brought. And I (secretly) didn’t even end up sore after the trip thanks to the things I didn’t have to carry.

Our dinner consisted of three recipes- one from each Dirty Girl. My recipe was Noodles with Spicy Peanut Sauce. I made it the first time in Yosemite, and couldn’t believe what an easy camping recipe it ended up being. I cut and measured everything at home, which allowed my frozen fingers to remain hidden in their gloves longer. Plus, it was once again nice to have ingredients that are usually already around for snacking. The peanut butter gives it that stick-to-your-ribs feeling, and the spiciness gives you some heat on a cold night. Most peanut sauces that use peanut butter suggest creamy, but I find chunky to be much more satisfying. The first time I made this, I added canned chicken. Aimee added broccoli, and my mom used only half a chili. Improvise away.