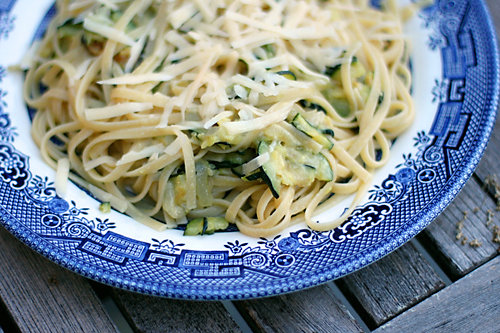 I’m sort of famous for my Zucchini Pasta, but I don’t deserve any credit. I learned to make it from my friend Rosella, an Italian girl I met when I was living in Finland. Rosella and I were both studying Food Science at the University of Helsinki, and we were the only foreigners in our group. Rosella’s English wasn’t very good, and I don’t speak any Italian at all. On top of that, neither of us spoke more than a few words of Finnish (it’s very easy to get by speaking English in Finland). Despite the language barrier, we hit it off by talking about food and commiserating over the dark, cold winter that we were both experiencing for the first time.

During one of our discussions about Italian food, I asked Rosella to teach me to make something that she grew up eating. When she learned that Kismat and I don’t eat meat, she was briefly at a loss for what to make, but after a few moments, she said “Zucchini Pasta!”.

So we met one afternoon at the big Stockmann department store in downtown Helsinki that has a fantastic grocery store in it. When Rosella saw the zucchini that were available at the market, she almost decided against making it—they were really big zucchini, and she liked to use smaller ones for this dish. (It was the middle of winter in Finland. The fact that you could even get zucchini was impressive.) We bought the zucchini anyway, along with an onion, spaghetti, extra virgin olive oil, a block of Parmesan, and milk. With the ingredients for our meal in hand, we hopped on the tram to go back to my house. 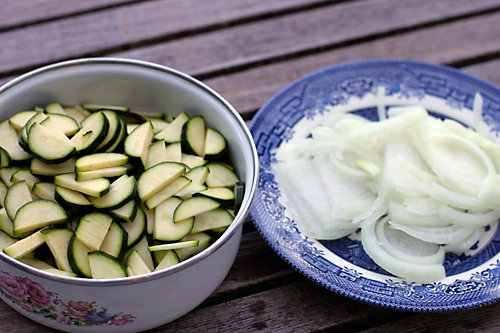 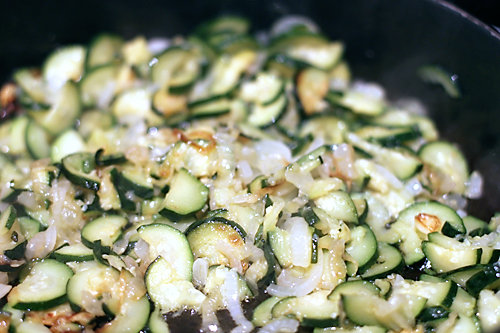 After a couple of glasses of wine and some pasta cooking lessons, we sat down for dinner. Rosella tasted the Zucchini Pasta first and said “It’s ok.” Kismat and I tasted it next and were blown away. Wow, how can those few ingredients come together to become this? And how could Rosella say “It’s ok”? It was incredibly delicious.

Now, every time I even mention that I might make it, Kismat goes a little crazy. Zucchini Pasta doesn’t sound all that impressive, but I’ve yet to meet a person who hasn’t liked it. It’s a great recipe for camping because it’s not fussy at all, and only requires a few ingredients and tools. And if you’re like anyone I know who has a garden, you’ll probably have more zucchini than you know what to do with at some point this summer (and if you do have a garden, don’t throw out those zucchini blossoms—chop them up and add them along with the zucchini).

Sadly, after she moved back to Italy, I lost contact with Rosella. Maybe our paths will cross again someday. For now, at least I have her Zucchini Pasta.