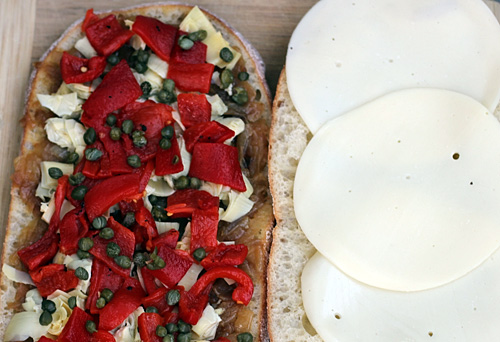 I have been living in Las Vegas for the past month, temporarily. Its a weird place, I know, but the greatest thing about it is that a lot of people like to visit. There is also plenty of controversy around the idea of stalking friends on Facebook, but that’s how I’ve found out many of our friends were coming to visit me. To think that if I hadn’t been stalking my friends on Facebook and instead was productive, I would have had to work all day today instead of climbing with my good friends from college!

These friends- Crystal and Mike- happen to be some of Dirty Gourmet’s biggest fans. They admitted to making Camping Nachos on almost every trip last year, having never thought to try nachos camping before. They are also big fans of the Almond Flax Granola and have given me a new recipe idea for it which is now on our testing list. It’s really awesome that the Internet has been able to keep me in touch with these lovely people and many others like them. Thank you Dirty Gourmet (and Facebook). 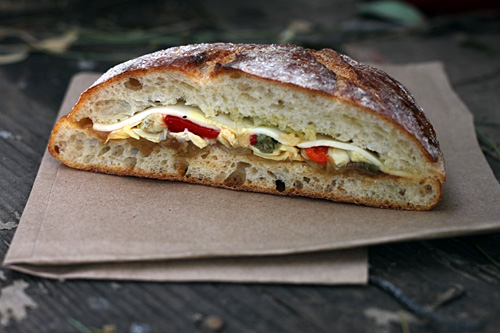 We love to watch peoples’ faces when we walk past lugging our refrigerator-sized crash pads on our backs while bouldering. Mike said he tells gawkers that we are “professional picnickers” to explain why we carry them. Today, for our Red Rock Professional Picnic lunch, we made ourselves sandwiches. We had to carry a big bulky plastic storage container that barely fit into our backpack to keep them from getting squashed, which is what always happens. I hate eating squashed sandwiches. Aimee came up with a pressed sandwich that would have solved all my problems if I had only thought to make it. She uses a bread that is tough on the outside, but soft on the inside, and then guts the bread a bit to create a little ingredient-holding pocket. The beauty of it is the pressed part, which is only aided by the squashing from the backpack. It can be filled with any ingredients you like, and is especially conducive to vegetables that would normally squirm their way out. Aimee’s version is full of Mediterranean flavor as well as squirminess. It’s a sandwich I would otherwise say you couldn’t easily take in a backpack, so I highly recommend this full recipe. Enjoy your own professional picnicking trip.

One thought on “Picnic Pressed Sandwiches”