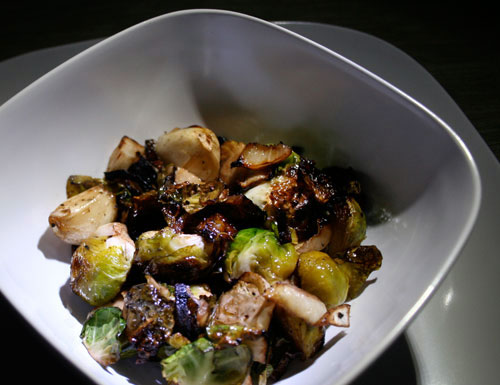 Stop! Before you even think about blowing this recipe off because you don’t like brussels sprouts, give me 2 minutes of your time and hear me out. Brussels sprouts have had some bad PR and I want to introduce them in a new light. Brussels sprouts are good (both for your health and your taste-buds), and they can be really good, if you make them the right way.

I am a relatively recent convert to brussels sprouts. The first time I had them was at a dinner party a couple years ago. I didn’t want to be prejudiced, but I was afraid as the brussels sprouts made their way onto my plate. I took a tentative bite, expecting bitterness. To my surprise, they were delicious. It may sound like I’m exaggerating, but they were seriously yummy. Straight out of the oven, the brussels sprouts were perfectly crispy and slightly salty on the outside. The inside was piping hot and cooked just enough to have that tender but crunchy texture (think broccoli here). I was in love.

After that, I attempted to make roasted brussels sprouts several times but failed miserably. I ordered brussels sprouts in restaurants whenever I saw them on the menu, hoping it would be as magical as that first time, but nothing came even close. I eventually came to accept that my first encounter with brussels sprouts was a once in a lifetime experience – never to be replicated again.

Fast forward to November 2009 at camping in San Clemente with the DG girls. We had compulsively bought a giant stalk of brussels sprouts (because it was pretty) and were wondering what to do with it. We decided to improvise. We grabbed different ingredients and started chopping. We had so many brussels sprouts that we ended up with two foil packets. Both had chopped onions, a couple garlic cloves and a little splash of olive oil. At the last minute, we decided to add balsamic vinegar to the second packet. We sealed the foil packets and over the fire they went.

What came out of that second foil packet was amazing. I don’t think we had any specific expectations but we were all really surprised by how good these roasted balsamic brussels sprouts were. What was equally surprising was how many brussels sprouts we managed to eat that weekend! If you’re going to give brussels sprouts an honest try, an eating contest is not necessary, but you have to try them THIS way. I promise you, you will not be disappointed. You may discover a new love or rekindle an old flame like I did.

"Mom, I never want to get big so we can always hav