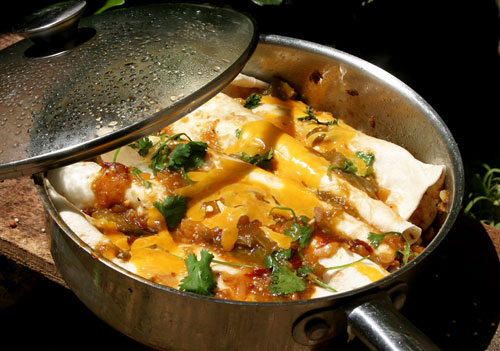 The night I first made Skillet Enchiladas was on our Carrizo Plains trip at Easter. We were surprised Saturday night by a strong cold wind that wouldn’t let up. It was one of those nights camping where you’d just rather snuggle in your sleeping bag than cook, but we forced ourselves to throw some things together. Its always worth it in the end, and that held true this time as well. We all made our own dinners, of course, competing for the kitchen and the fire. Skillet Enchiladas ended up being the easiest thing I could have chosen. All my ingredients were prepped ahead of time, except the roasted Anaheim chile. That just gave me an excuse to stand by the fire while roasting it, so that was fine. Then I put some canned enchilada sauce in the bottom of a skillet, rolled some tortillas around a handful of ingredients, and put the lid on. They were such a warming and easy camping recipe that I made two skillets worth that night. That’s my favorite kind of gourmet outdoor cooking!

I never revisited my Dirty Skillet Lasagna. I know that makes me a wimp, but maybe just calling myself a wimp will motivate me to go out and try again soon. Until then, though, I’m stickin’ to what works, and making car camping Skillet Enchiladas! Another great recipe for a nonstick skillet and a simmer control stove, Skillet Enchiladas are satisfying crowd pleasers. They are made with typical enchilada ingredients, but on a stovetop instead of an oven. This may work better as a “dirty version” recipe than the lasagna, although I can’t be sure yet. It doesn’t require nearly as much simmering to cook, so it may not stick as easily to the bottom of the pan. Plus, if it sticks a little, it adds the crispiness that you look for in an enchilada- just upside down. Maybe I’ll try the dirty version of this recipe soon too.

I most recently tried making my own sauce with tomatillos and chipotle peppers, continuing on our chipotle kick (because we all need help using up the rest of that can in our freezers). It is excellent and tangy, if you have the time. The tomatillos do take a little while to break down. I added this to the recipe below, although canned enchilada sauce makes it much easier, and still tastes great.

I made these once with chicken, once with pork, and once vegetarian, and they were all a hit. Most recently I was finally able to find fresh corn, which I roasted along with the Anaheim chile. I think its always worth it to use fresh corn when you can find it. It seems that my addiction to Mexican food is paying off when it comes to testing this recipe. Enjoy! 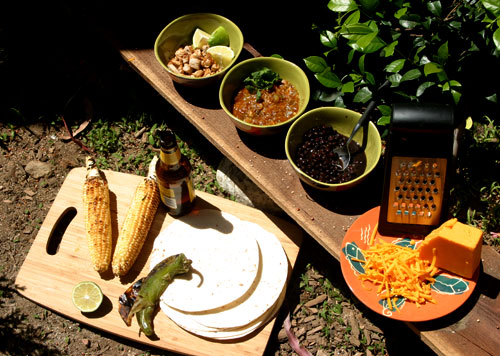