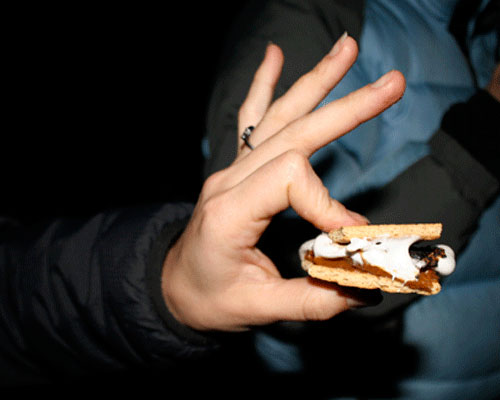 I think it’s safe to say that smores represent the all-American quintessential campfire delicacy. For a long time, smores were shrouded in mystery for me, equated with something only in Hollywood family movies (badly French dubbed movies at that). It was clear I was missing out on something big, and it was only until I moved to the U.S. that the mystery was solved.

For those of you outside the 50 states, who are still wondering – what the heck is a smore?!? – let me shed some light on the matter. The classic smores consist of the following – a graham cracker, topped by a piece of milk chocolate, then layered with a roasted marshmallow and, finished off with another graham cracker. It sounds so simple, but this sweet dessert sandwich has a serious cult following.

Being that smores are practically synonymous with camping, we decided to embark on a quest for the ultimate smores. Rest at peace, we don’t plan on dethroning the classic. Our goal is to explore variations on the topic that, we predict, will lead to some very tasty discoveries.

To begin our quest, we had an open casting call where our friends brought an ingredient of choice for our New Year’s Eve smorgasbord. The two stars of this audition where brought in by Jamal & Vanessa. Jamal had a clever twist on the cracker and chocolate ingredient combination, replacing them with chocolate & nut covered Geneva cookies instead. What made it especially yummy (and very structurally sound) was Vanessa’s introduction of dulce de leche . We present to you the first of many variations: Smores #2 – Geneva de Leche. For those who are still catching up, we’ve also included the classic recipe for you. Happy marshmallow roasting!