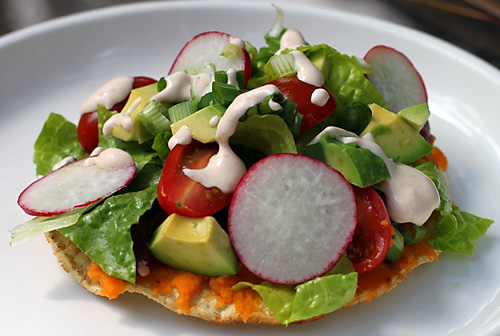 Our friend Ben came down to visit from Humboldt State last weekend. He came with two of his teammates to race bikes in the San Dimas Stage Race. Though they live in the rain a good portion of the year and definitely have experience racing in it, they weren’t thrilled to hear the miserable forecast for the weekend. They’d chosen Southern California because of reputation for good weather for their Spring Break week race, and were not impressed that it didn’t comply with their wishes.

The race lasted all three days. Friday was a time trial (ride as fast as you can by yourself) up Glendora Mountain Road (the mountain that Wes made me ride up for his birthday last year). Saturday was a road race around Bonelli Park where I run every week (8 laps around a 7 mile loop). Sunday was the “crit” (ride around a tight circle a million times in a big group and don’t crash, taking everyone around you out with you).

Saturday truly was the saddest weather I’ve seen in a long time. That’s the day I went to watch, and I got some good gear testing done on my new softshell, because it was hailing and windy and pouring the whole 10 minutes I was outside. We watched from the top of the steepest climb, and even the pros looked like they were going slow. Ben told us they all just pressed their brakes as hard as they could on the descent to keep them going slow enough not to die. He said he saw three crashes, and each just involved one guy falling over from the wind or slippery pavement or their legs no longer continuing to work. He said that he was so cold that he tried to eat a goo and couldn’t even close his hand around it so it just fell.

Luckily, Sunday gave them sun (haha), and there were a lot less people left to race against. The boys struggled through it, and then the worst part was that they had to drive ALLLL the way back up to the northernest part of the state. They were some tough boys, even for my standards.

They also can eat. We made 3 full trays of enchiladas, about 10 lbs of potatoes, and 2lbs of spaghetti. It’s all gone, as well as the 6 packages of bagels they brought and all the food they went out to eat as well. I wish I’d tried out this Sweet Potato Tostada recipe on them while they were here. I heard it creates a feeding frenzy with big crowds, like Aimee’s family, without the cook actually having to do the assembling (always a plus when cooking outside).

If you wanted to take this car camping, you could make the sweet potatoes and chop the veggies ahead of time for a super quick camp meal. If your goal is less around quick and more around delicious, cook the sweet potatoes in foil in a campfire and pan fry tortillas in a cast iron skillet at camp for fresh tostada shells. Yum! 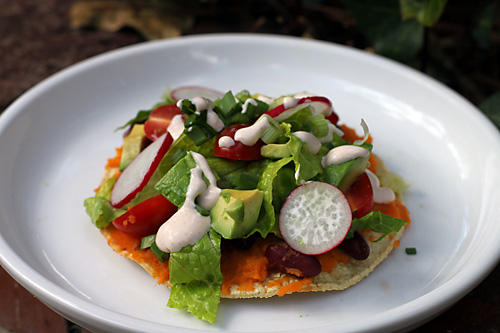